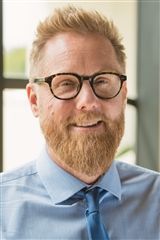 Middle School Director
A native Californian, Geoff Agnor joins us from the Berkeley Carroll School in Brooklyn, where he worked for eight years as a teacher, dean, coach and co-chair of the Middle School Humanities Department, which he helped establish. Geoff began his teaching career at Crossroads School for Arts and Sciences in Santa Monica, where he worked as a teacher, dean and coach from 1997-2007. Geoff earned his bachelor’s degree in sociology from UCLA and holds a master’s degree in anthropology and documentary film from NYU. As part of the TEAK Fellowship, Geoff mentored talented NYC students from low-income families. He has presented innovative curricula for the National Council for Social Studies (2013, 2015) and NAIS (2014) and is a fellow at The Academy for Teachers (New York). Geoff has led educational trips to Costa Rica, Wyoming, and Turkey. In 2015, Geoff studied indigenous cultures in Oaxaca, Mexico, through a grant from the National Endowment for the Humanities.